It is a great feeling to have received so much positive feedback on my decision to get Cochlear Implant (CI). But it is also strange to know that so many people have considered my situation and the frustrations that I have told about on this blog. Right now I can see that 145 people have read on my blog. I think that is quite a lot people – the blog has only been public for about 26 hours.

In my previous post I shortly told about that I last was at the audiology department on Thursday. It was here decided that I should have a surgery in order to receive CI on both of my ears. But that post I did not write much about the process at the audiology department and what is going to happen. Now I feel positively encouraged because of all the nice feedback and I have more energy and a much bigger lust for continuing writing on this blog 🙂

When looking at the process at the audiology department there were two main things going on. First of all I had some detailed hearing tests and some clarifying conversations with an ENT and an audiologist.

The first part of the hearing tests went like normal – they were however much more thorough in the sense that we tested more frequencies and spent more time on finding the exact level at which I could hear a sound. The hearing test look like some of those I have received in the past so there is not much to say about apart from the fact that it is much more accurate. 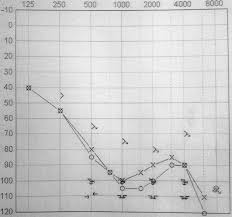 Apart from the hearing test I had some detailed tests of my ability to discriminate sounds. The results was a loss of speech discrimination at 60% on my right ear and 72% on my left ear.

In order to make sure the hearing was correct I also had an automatic test where I simply had to lie in a bed with 4 electrodes attached between my ears and in two locations on my face. It was actually a very comfortable test as all I had to do was to relax as much as possible while some clicking sounds were played in my ears. It could actually sound like a machine gun fired at a long distance 😉 The biggest challenge was to ignore this sound and the fact that they had provided me with a bad pillow on the bed.

Conversation with the ENT

After the thorough hearing tests I had a conversation with an ENT in order to clarify if CI would be a good solution for me. The ENT started by asking for details on my hearing history. In very short my story is that I got my first hearing aids when I was 2-3 years old and that my hearing loss have been progressive until the age of 10. It was then stable for about 10 years. In the recent years it have started to become progressively worse – This is of course an important reason for why I started to look for new options.

The ENT then asked me about my ability to hear and the problems I experience. I of course told hear about a lot of the things I have written about on this blog. I also told that I have had contact with different CI users that had given me the impression that they could hear better than me in some situations. But my main focus was on explaining about the situations where I experiences problems with hearing as described in this post.

The ENT told me that when she looked at the tests that I have just performed I appeared like a very good candidate for receiving CI. I cannot remember exactly how she expressed it but I was very surprised that she had such a positive view on me getting CI. I had as mentioned in my previous post been very much in doubt if my hearing was bad enough in order for CI to be a solution for me. It was a huge relief to get this message – my worst fears were cancelled 🙂

After some more talking about CI we started to talk specifically about which solution I should have. I took the initiative to take a talk about getting the surgery on one or two ears. I had already read a lot about the advantages and disadvantages about having CI on one or two ears. I dont want to explain all these advantages and disadvantages here but the most important arguments for going bilatteral was in my point of view that many users that have one CI decides to get one on the other ear later on. Also it appears that many people experience that when they get the better sound on their CI ear their brain sort of prioritizes this sound which means that they start to hear worse on the other ear. Also the different sound may lead to a worse ability to detect the direction of a sound.

The ENT approved many of my points about this and in the end it was decided that I would get a surgery on both of my ears. In the end of the conversation we talked about through the risks that might occur with this surgery and about the things that should be done before I could get the surgery.

In short I need a CAT scan, a balance test and a vaccination. Today I received a letter with an appointment for the CAT scanning which will happen on december 10 – this is exciting but not as exciting as it will be to get the final date of my surgery 🙂

Conversation with the audiologist

After having talked to the ENT I had to talk with an audiologist. Here I was introduced to the implant and the processor that I should have on my ears. She told me that the manufacturer was going to release a new processor soon that would be better and more compact. But before our conversation she had talked with the manufacturer and made an agreement that I could start with the current processor and have it exchanged to the new one when it gets released. Cool 🙂

In order to make it possible to compare my ability to hear before and after my surgery we also made some additional discrimination tests. Ironically it turned out that I did not have any problems with their normal tests where she just read some sentences that I should repeat. We therefore made a test of the ability to discriminate in noise. This test was done on a computer that played some weird sentences and some noise in the speakers. I then had to select the words on the screen that I heard. For each word I had an option of selecting 3 words on the screen. The thing that made this test very hard was that if I answered correctly it would just amplify the noise. It was a frustrating test as there were periods where I did not understand a single word. She said that people with normal hearing would also get this experience if they did this test. The result of this Signal-to-Noise relation test was a score which I think was +1,034 – I think she said that a normal hearing person would score between -5 and -6. At the current moment I cannot explain what these numbers mean – I hope I figure that out later on 🙂

I use cookies on my website to give you the most relevant experience by analysing statistics on how the site is being used.

This website uses cookies to improve your experience while you navigate through the website. Out of these, the cookies that are categorized as necessary are stored on your browser as they are essential for the working of basic functionalities of the website. We also use third-party cookies that help us analyze and understand how you use this website. These cookies will be stored in your browser only with your consent. You also have the option to opt-out of these cookies. But opting out of some of these cookies may affect your browsing experience.
Necessary Altid slået til

Performance cookies are used to understand and analyze the key performance indexes of the website which helps in delivering a better user experience for the visitors.

Analytical cookies are used to understand how visitors interact with the website. These cookies help provide information on metrics the number of visitors, bounce rate, traffic source, etc.

Advertisement cookies are used to provide visitors with relevant ads and marketing campaigns. These cookies track visitors across websites and collect information to provide customized ads.

Other uncategorized cookies are those that are being analyzed and have not been classified into a category as yet.